Trip Details
Ready for a unique travel experience? South Korea fits the bill and then some. On this eight-day trip, you’ll see the highlights in and around Seoul plus visit folk villages, unique Korean temples, and the bustling markets of Busan. Learn about the sombre history of North and South Korea and take an excursion to the Demilitarized Zone separating the two. This is the perfect snapshot of a country coming into its own as a top travel destination.

Day 1 Seoul
Arrive at any time.

Day 3 Seoul (1B)
Visit the Demilitarized Zone (DMZ) between North and South Korea. With over a million soldiers on watch each day, it is one of the last remnants of the Cold War.

Day 4 Seoul/Gyeongju-si (1B)
Travel to Gyeongju and visit the UNESCO-listed sites of Seokguram Grotto and Bulguksa Temple on an included tour.

Day 5 Gyeongju-si/Busan (1B)
Take a day trip to Yangdong Folk Village, a UNESCO site, before continuing to Busan to visit the Haedong Yonggungsa Temple and relaxing with a trip to Haeundae Beach and Dongbaek Island (APEC House).

Day 6 Busan (1B, 1D)
Visit the bustling Jagalchi fish market, Gukjesijang market, and Yongdusan Park, before an overnight in a local temple.

Day 7 Busan/Seoul (1B)
Enjoy a final morning in Busan before returning to Seoul by train. Visit the Namdaemun Market and N Seoul Tower in the afternoon, then have some free time for your final evening in Seoul.

Day 1 Seoul
Welcome to Seoul! As fellow travellers are arriving throughout the day, there are no planned activities until a group meeting at 6 pm. Check into the hotel and enjoy the city.

After the welcome meeting, join your CEO for an orientation walk down Cheonggyecheon Stream to learn about Seoul while walking past small waterfalls and nearly two dozen overhead bridges. Then, enjoy the dense grid of streets found in the bustling neighbourhood of Myeongdong which is packed with people at all hours of the day looking to enjoy some of the best shopping, street food, and nightlife in all of Korea.

Opt for a group dinner to end your first night!

Day 2 Seoul (1B)
After exploring the city, opt to see a show, explore a local museum, or hit the pavement and eat your way through street markets trying local fares such as bibimbap, soondae, and kimchi.

Day 3 Seoul (1B)
Spend about 3-4 hours visiting the Demilitarized Zone. On your way there pass by the Blue House, home to the President of the Republic of Korea and South Korea's official government complex.

The DMZ was founded in 1953 when the Korean war ended and it is highly militarized on both sides. With a buffer zone 4km wide and spanning 250 km long separating North and South Korea there has been very little development in the area, therefore nature and wildlife have pretty much taken over.

Later, return back to Seoul for another night in the city.

Additional Notes:
A DMZ shuttle bus will be used within the DMZ area.

Day 4 Seoul/Gyeongju-si (1B)
Depart Seoul in the morning and travel by high-speed train to Gyeongju, taking just over two hrs to reach the city.

In the afternoon, enjoy an included tour of some local highlights, including the UNESCO World Heritage temples. Later, opt to further dive into Gyeongju by visiting some more local historic sights or basking in the serenity of Anapji Pond.

Day 5 Gyeongju-si/Busan (1B)
Take a private van to visit the 500-year-old UNESCO site of Yangdong Folk Village, located in Gyeongju National Park, to get a feel for life during the early Joseon Dynasty.

Travel to the picturesque 14th century seaside temple, Haedong Yonggungsa. Continue to Busan and enjoy a walk or swim at Haeundae Beach, the most popular beach in South Korea, or perhaps a light trek on Dongbaek Island.

Day 6 Busan (1B, 1D)
Stay in rooms called Ondol. These rooms are very traditional, heated to be cozy and comfortable, with beds made up directly on the floor. The rooms here are multi-share, divided up by male and female rooms. Enjoy a traditional dinner and breakfast during the stay.

Have the opportunity to learn about temple etiquette, experience the daily drum and bell ritual, craft your own prayer beads and take an easy hike up to the oldest and highest temple in Busan for morning meditation.

Day 7 Busan/Seoul (1B)
After arriving into Seoul by train head to check out Korea's oldest traditional market, Namdaemun Market. Then make your way by cable car to N Seoul Tower to see this beautiful landmark and opt to make the trip up to the observation deck if you're feeling adventurous. Spend the rest of your day in Seoul seeing Banpo Bridge, the floating islands or hanging out in the Gangnam district. 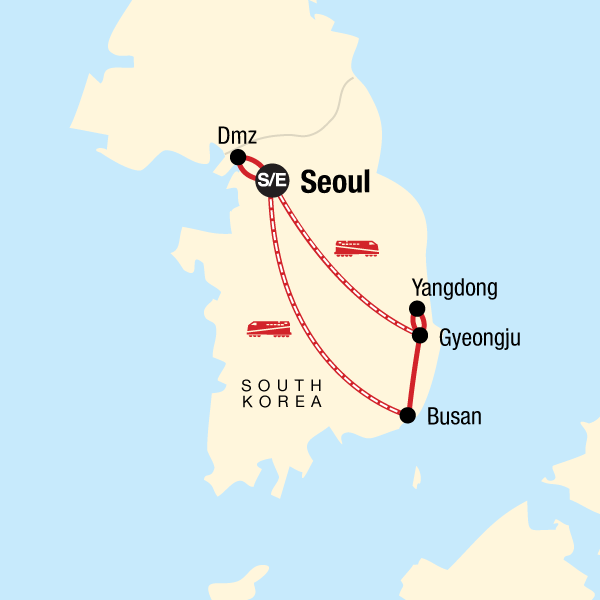 USD2,649.00
Additional Information
Remark
The partner is responsible for all the information provided.